Chapter 2 : Cells
What is a Cell?
Cells are the structural and functional units of all living organisms. Some organisms, such as bacteria, are unicellular, consisting of a single cell. Other organisms, such as humans, are multicellular, or have many cells—an estimated 100,000,000,000,000 cells! Each cell is an amazing world unto itself: it can take in nutrients, convert these nutrients into energy, carry out specialized functions, and reproduce as necessary. Even more amazing is that each cell stores its own set of instructions for carrying out each of these activities 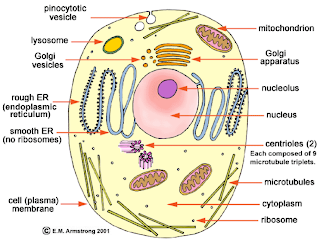 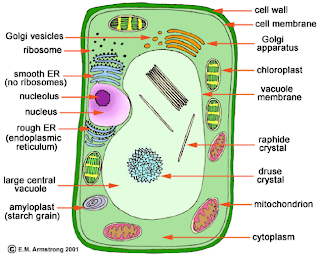 The cytoplasm is part of the protoplasm between the cell surface membrane and the nucleus. This is where most cells activities occur. It contain enzymes and specialised structures called organelles. Organelles carry out various functions in the cell.
Cytoplasm can exist in sol or liquid state or in gel or semi-solid state due to its jelly-like consistency. It’s outer regions is usually in gel state while the inner region is usually in sol state.

3.    Nucleus
Nucleus consists of a small round mass of denser called, nucleoplasm, surrounded by nuclear envelope. Nucleus contains one or more nucleoli (singular: nucleolus) and chromatin.
Functions of nucleus:

·       It controls cell activities (repair of worn-out part, etc)
·      It is essential for cell division
4.    Cell Wall
Cell wall is made of cellulose. It protects the cell from injury and gives the cell a fixed shape. The cell wall is fully permeable. Cell wall is absent in animal cells.

5.    Chromatin
It has a network of long thread-like structures found within the nucleus. It controls the activities of the cell (example: division). Each of the thread is made up of proteins and a compound called deoxyribonucleic acid or DNA. When cell are dividing, the chromatin threads condense and become highly coiled structures called chromosomes.


6.    Mitochondria
Mitochondria (singular: mitochondrion) occurs during aerobic respiration. During this period, food substances are oxidised to release energy. This energy may be used by the cell o perform cell activities (example: growth and reproduction).

7.    Ribosomes
Ribosomes are either attached to certain membranes or lie freely in the cytoplasm. They are needed to synthesise proteins in the cell.

8.    Chloroplasts
Chloroplasts contains a green pigment called chlorophyll. Chlorophyll is essential for photosynthesis, the process by which plants make food. The chloroplast is absent in animal cell.

9.    Vacuoles
A vacuoles is a fluid-filled space enclosed by a membrane. Its store substances within the cell.


Differences between plant and animal cells


How is cell structure related to cell function?


How do cells work together in a multicellular organism?
Cells may be grouped together to carry out specific function and it’s called a tissue.


Simple tissues in animals
The epithelial or epithelium is a sheet of cells which cover the internal and external surfaces of the body. Muscle tissue is a collection of muscle cells which helps your body to move by contracting.


Simple tissues in plants
The leaves and stems of plants have covering tissues called epidermis. And not all tissues are made up of the same cells. Some may contain several types, this is called complex tissue.

Complex tissues in animals
The tissue found inside an organ or between organs is called connective tissue. It consists if a few types of cells. However, the tissue has one function: to connect the different parts of an organ or organ together.
Other examples of tissue in animals: nervous tissue, glandular tissue, bone tissue.
Complex tissues in plants
Vascular tissue is made up of xylem tissue and phloem tissue 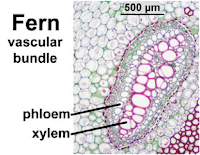 Tissues com bine to form organs
Different tissues may be united to form an organ. An organ is a structure that is made up of many different tissues working together to perform a specific function.
Organ in animals:
·       The stomach is an organ whose function is to temporarily store food, digest and churn it. The stomach is made up of four different tissues:
-       Glandular tissue which secretes digestive juices to digest food;
-       Muscular tissue which causes the stomach to contract and mix the food with the digestive juices;
-       Connective tissue which connects the other tisses together;
-       Nervous tissue which coordinates the actions of the stomach
Organ in plants:
·       It contains palisade tissue, spongy mesophyll tissue, xylem tissue and phloem tissue.
Organs work together to form organ systems
Several organs working together for common purpose make up an organ system (example: digestive system, respiratory system). Various systems work together to make up the entire organism.